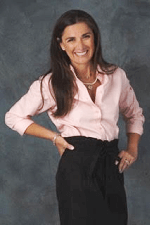 In addition to being a Licensed Realtor in the State of New Jersey, Ms. Gemma has also been the owner and operator of 5 woman’s clothing stores both in and out of state. Her involvement in the fashion industry also included publishing a successful blog on the latest trends and tips,  as well as appearing as a celebrity judge on television. In addition to her professional career, Ms. Gemma has been and remains active in politics working on numerous local, state and federal campaigns. Through her efforts, a write in candidate for Mayor in Monmouth County was successfully elected within a six week campaign by effectually using social and other media. Ms. Gemma has also been active in many charitable and other organizations including the Cancer Support Community for Monmouth Medical Center where she started and ran an annual fashion show for cancer survivors that empowered and encouraged both men and women battling this disease. Ms. Gemma currently sits on the Board of Directors for The Jersey City Theater Company as well as Hudson Pride.